“Can You Hear Me Now”

Deuteronomy 6:6-7 Amplified Version
These words, which I am commanding you today, shall be [written] on your heart and mind. You shall teach them diligently to your [b]children [impressing God’s precepts on their minds and penetrating their hearts with His truths] and shall speak of them when you sit in your house and when you walk on the road and when you lie down and when you get up.

This 2-hour virtual session will consist of a lecture and open discussion.

Welcome
Foundation of the Session
It is our vision to respond to the spiritual and emotional needs of the youth within the National Capital Baptist Convention and Congress of Christian Education community by providing relative programs, activities, and events that will nurture their growth as young people of faith. 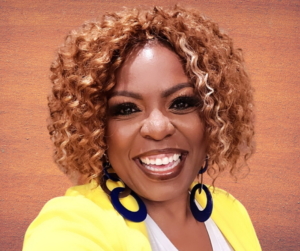 Min. Tammie Terry was born and raised in the Chicago-land area. She started her work with youth in ministry and her personal life 1997. In 2001 she was licensed as a Minister of the Gospel and continued to work as a Youth Director. She relocated to Maryland in 2013 where she continues her work in the Human Social Service Field at DC Government Department of Youth Rehabilitation Services (DYRS).

In 2015 Min. Tammie joined the New Commandment Baptist Church under the leadership of Rev. Dr. Stephen E. Tucker, Pastor. She currently serves as the Youth and Young Adult Minister. In 2021 Min. Tammie was appointed the Children and Youth Director of The National Capital Baptist Convention and the Congress of National Capital Christian Education of Washington DC and Vicinity.

Min. Terry is an alumnus of Western Illinois University where she received Bachelor’s degrees in both History and English. She later received a Master’s degree in Public Administration, (MPA). Being a mother of six and grandmother of six is one of the greatest honors of life.

In 2020 Min. Terry begin publicly speaking as Amplified Voice, an Inspirational Speaker on Social Media Platforms including YouTube. She also became the host of the morning show “Good Morning Sunshine” with ReStart America. Min. Terry is devoted to being a positive influence in the lives of those she comes into contact with in a daily basis. On March 8, 2022 Min. Terry published as one of the contributing writers in the Women’s History Month Edition of She ROCKS It Magazine sharing HERSTORY “The Weight of it All”, which led to her being one of three guest panelists for their I AM SHE Event on March 13, 2022.